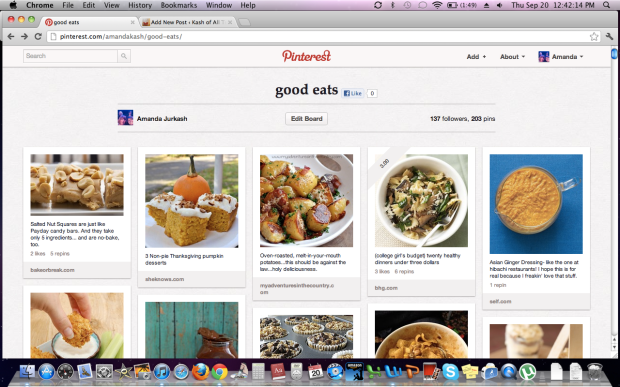 Guys, I’m doomed to be one of those people who belongs on one of the Pinterest Fail blogs, only I’m not making my house explode with dishwashing soap or whatever. So far I’ve made a handful of recipes from Pinterest, two of which I was very excited about. One was a homemade pumpkin spice latte, and the other was quinoa mac and cheese. Both were disgusting. Allow me to explain.

Looks fantastic right? And I’m super pumped about it because if you know me, pumpkin spice latte time is my FAVORITE time of year. I love pumpkin anything, so to add coffee to it makes it even more amazing. Now, I’m not going to lie, I really didn’t expect this drink to be as good as the Starbucks one, but I didn’t expect it to make me gag. Seriously, it did. I almost threw up. But to read this woman’s blog you would think that the little baristas at Starbucks magically flew into her home, taught her how to make it with non-Starbucks sanctioned ingredients, and then flitted away while she sipped her new found love affair. All without the use of an espresso machine and or milk frother. Well, it definitely wasn’t anything remotely close to that.

I followed the directions implicitly. I’m very good about these things. I even used pumpkin coffee like she said! (Millstone makes the best one, by the way. Don’t buy the Dunkin Donuts one, even though the package is pretty it tastes awful.) But I couldn’t handle it. I can’t even describe the level of gross that this was. But it didn’t make any sense because I tried the pumpkin milk before adding it to the coffee and that tasted fine! But combining it all together was just a mistake of epic proportions.

Next, came the quinoa mac and cheese.

I swear, these people must have professional photographers taking their pictures because this is what my quinoa mac and cheese looked like: 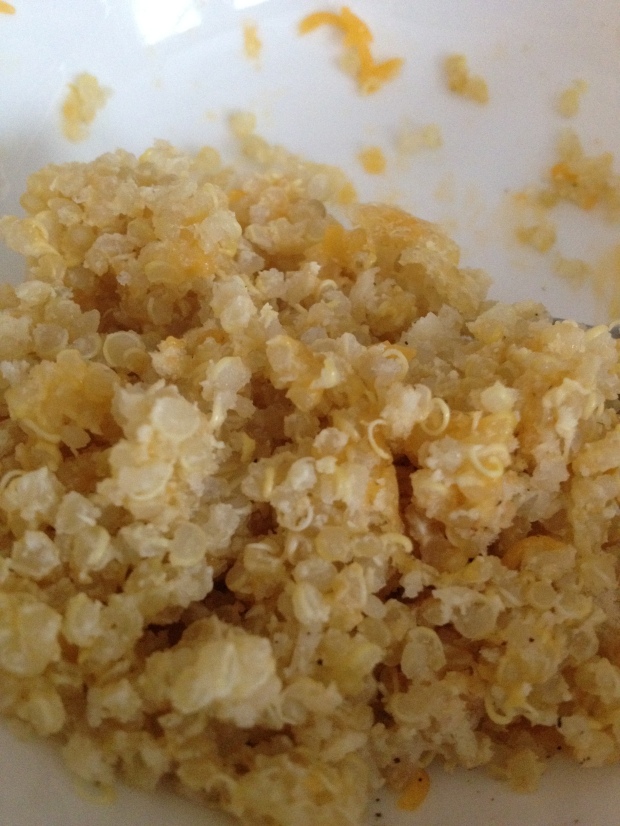 Not so great looking, right? Right.

Theirs looks like this gooey, cheesey, deliciousy side dish. Mine looks like what it tasted like: dry, gross, and lame. I’ve never had quinoa before, so I was thinking what a great way to be introduced to it – through boatloads of cheese! Not so much. Again, following the directions exactly, and I got this. And I keep eating it thinking it’s going to get better, and it really, really isn’t. I can’t even think of anything to add to make it better, other than 3x the amount of cheese than the recipe calls for.

I’ve also made a deep dish cookie that looked really good, but was actually very dry and a waste of an egg. Think about it, if a chocolate chip cookie recipe (mine at least) calls for 2 eggs for an entire batch, and you’re putting one yolk into this deep dish cookie, that’s completely ridiculous. I’m not very good at saving egg whites either, so it’s a waste of an egg in my opinion.

In essence, I’m afraid to make the pumpkin oatmeal that I’ve been looking at. I’m afraid that it’s going to be a waste of ingredients a la the quinoa mac and cheese and I’m just going to end up tossing it, which I don’t want to do. But I’ll probably make it anyway. It gets done in the crock pot, so maybe I’ll put it on today and then I’ll be able to test it tonight. That way I won’t wake up to a disaster and I’ll be able to make something else for breakfast if it sucks.

P.S. I’m getting a sports massage today. I’m very excited about it. I’m hoping that she can work out the knots and tightness in my legs and then I’ll be able to start fresh. Weeee!