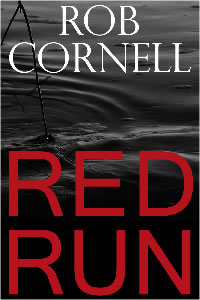 I wish it was Red Rum.

This book started off great. I was instantly drawn into the story of Ethan Trent and his dysfunctional family. However, as the plot started to unfold, well, it basically continued to unfold and you’re left with a pedestrian murder mystery that reinforces the need for more positive mental health care in our country.

Ethan Trent is awoken one night, assuming it’s his daughter sneaking back in, is sadly mistaken when a police officer informs him they’ve found her body after being beaten to death. Turns out Ethan is the father of two typical teenagers, who resent him, sneak out, and do all of those things that parents get pissed about. He also has an estranged ex-wife who is a heroin addict and has a restraining order against her concerning the kids. And her brother is nuts. But they all used to be besties, so Ethan hates himself for that.

He escaped from that life, became a grown up, and has since lodged quite a stick up his ass. He’s also got a new girlfriend, with a past of her own, but that doesn’t really get fleshed out as much as we’d like.

It’s not that the book is poorly written, or that the characters are that awful, but there’s just something about the story that doesn’t sit well. It just kind of seems like the story of every police procedural you see on TV during primetime. Only without the police. Ethan tries to take matters into his own hands (but not in a vigilante way) to solve his daughter’s murder when his son becomes a suspect, and everything goes to shit. In his life and in the structure of the book. Everyone hates everyone, nobody cares, and everyone is out for blood.

There were a few editing errors, that could be a result of reading an e-copy, but at one point Ethan is struck above the wrist with a wrench and feels the pain radiating down his femur. As we know, your femur is that large ass bone in your leg that goes from your hip to your knee, so I’m not sure about the path that his pain took on that occasion. I also had an issue with Ethan’s girlfriend craving his warmth so intensely in the one love making scene that she didn’t need to climax, she just needed to be with him and feel his release. Just a personal thing, but it stuck with me.

I think I grabbed this because I thought it was something else, and it was $1 in the Kindle store. I guess I can see why. I saw in the back of the book that Mr. Cornell has a couple other books that are a part of a series, but I can’t say that I would reach for them anytime soon. Or ever. Just not for me.