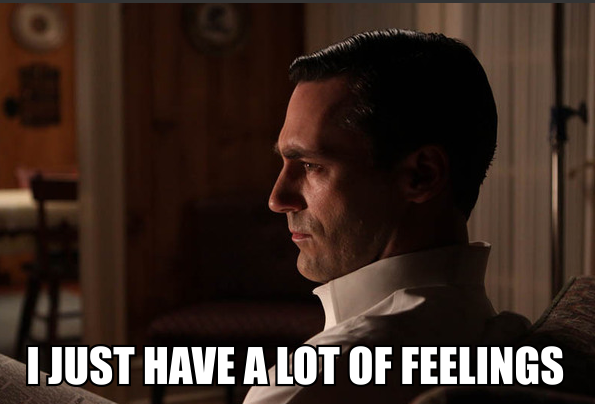 I know, it’s weird. I’m a woman so I’m overly emotional (right?) and prone to outbursts regarding those emotions (right?) so it’s only appropriate that I talk about them publicly (right.). I just came from my first BSN residency meeting, which I wasn’t quite clear on (and still am not) the purpose of. I understand that it’s a place where we can feel comfortable being uncomfortable, and learn that we are not alone in our feelings of frustration, especially with ourselves, for not knowing what everyone else already knows. But I’m not sure what today accomplished, other than introduce us to that notion (which we already knew about from being on the floor), and some other people in that same position. Anyway, it brought up some feelings that I have concerning where I am in my nursing career.

I know nothing. Honestly. People ask me questions every shift and I don’t know the answers. I know that I need to look at where I have come from and not just where I need to be, but it’s so difficult when there is so much you don’t know! I expected it in my synthesis while I was still in school, but once you get out you realize that you still have a year, probably two, before you know what’s going on. Two years! That’s a hell of a learning curve. There are certain things I know that I can do, tasks that I can perform. But I feel so far from full circle, big picture care.  I’m scared that I’ll miss something, but I’m more scared that I will say something that’s wrong to a family. Give them a sense of hope that isn’t there, make them think someone will wake up who won’t, that kind of thing. I freeze when I have to talk to people, and I think that makes them more uncomfortable, which is no bueno.

I also feel like I’m pulling myself in several directions as far as a long term situation goes. I know, right now, that I am in no hurry to go back to grad school, but even with that on the horizon it stresses me out. I know (well, I think) that I want to end up in pediatrics, but that won’t happen for a while and it stresses me out. I think about how I’m going to feel like this for over a year and that stresses me out. Then I think about the fact that if I do switch to peds I’ll have to go through all of this again. And then that stresses me out. A year of finding my footing and then switching to an entirely different speciality? That sounds dumb. And like I might need medication to be alive and functioning. Ugh. All of this potential stress makes me question everything. Literally, every decision I make, I second guess myself. Should I use 2 tbsp of creamer or 3? 3 tastes better but it’s more calories. But it’s 10 calories who gives a shit? But a calorie is a calorie get your self in control. This is not a joke. This is my life.

Like right now, I know that I need to redo an ECCO and I need to do these web things, but I’m stuck. I feel like there is so much on my plate instead of just deciding where to start, I move the plate over and eat popcorn instead. A huge bowl of it so that I can ignore the plate as long as possible. Probably not an effective coping mechanism, but right now it’s all I’ve got. I know to ask for help. I know who to ask for help. I’m not afraid or too proud to ask for help. It’s just that sometimes I don’t know when, or how to articulate what I need help with.

I’m not floundering, I’m just overwhelmed. I’m working on it. This will also somewhat serve as a reference point when in a year, I’m hopefully not so stressed, or lost. Hopefully.

4 thoughts on “Feelings: I Have Them”